The TurkAegean where civilizations bloomed early is a fantastic destination that offers a unique experience. Home to hundreds of archaeological and natural sites, the region has always been an important hub in history. With numerous sites included in the UNESCO World Heritage List, the region is like an open-air museum where you can discover the history of mankind step by step among the archaeological remains. The TurkAegean is the region where the sun’s rays nourish the olive groves finding their roots among millennia of shiny marble.

Bearing the traces of great civilizations to the present day, Pergamum was “the most illustrious city in Asia Minor” according to the ancient historian, Pliny the Elder, and still is as it is on the UNESCO World Heritage List.Pergamum was one of the oldest healing centres of the ancient world, the Asklepion, and the birthplace of Galen, the great physician, who led the way for modern medicine today. 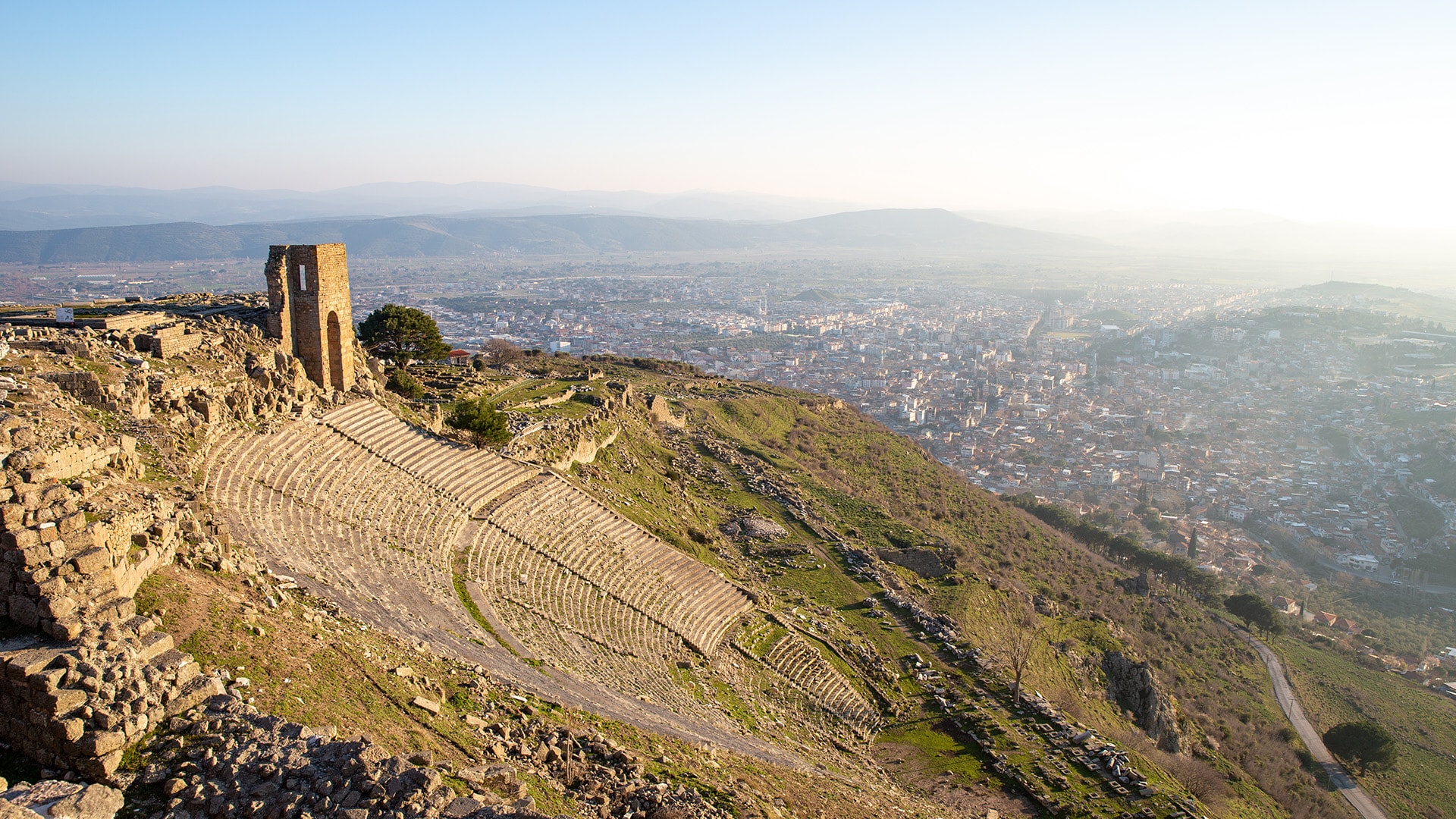 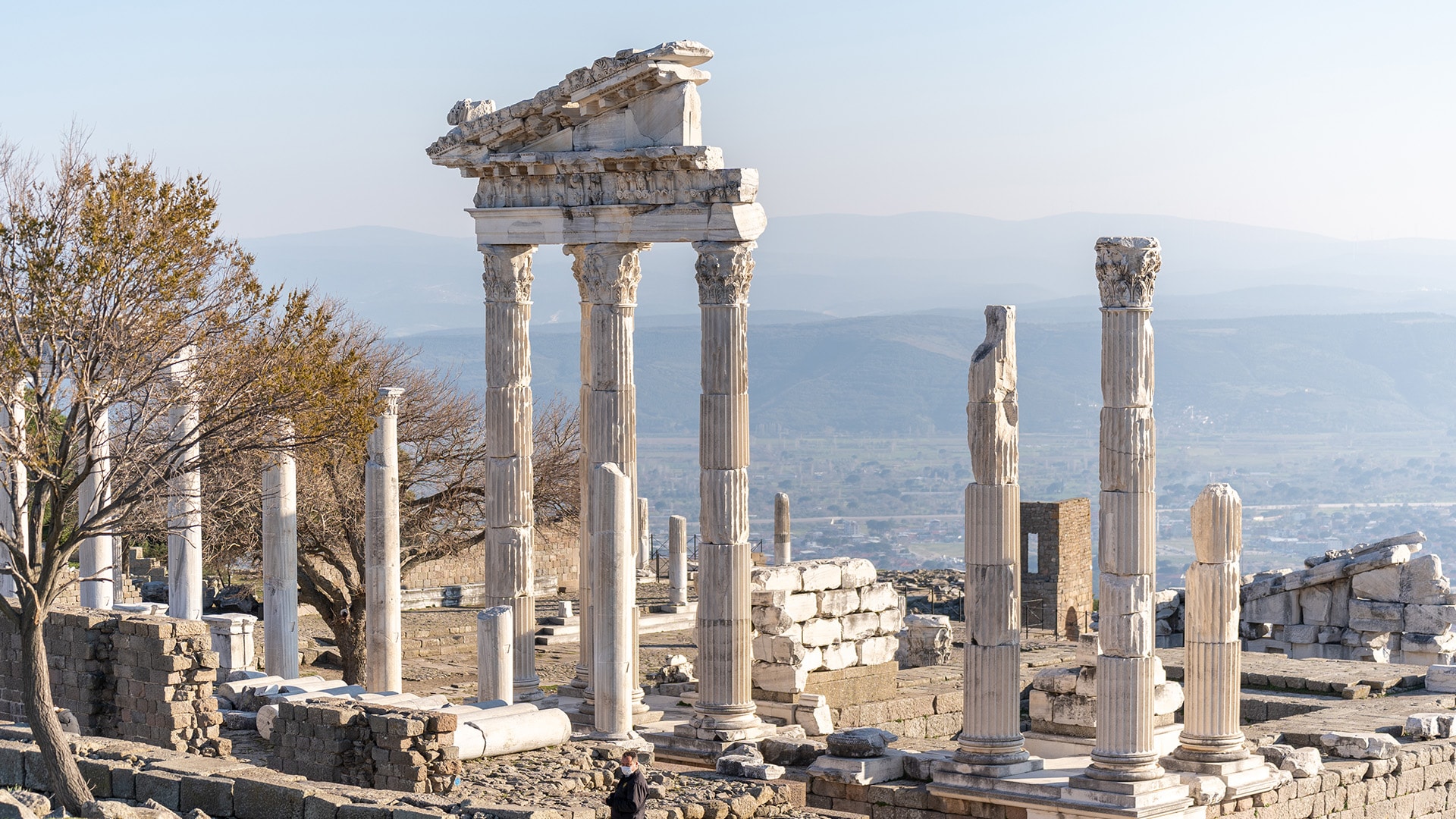 Classical splendour was so reflected in the city’s architecture, art, medicine, culture, and education that the invention of Pergamenese Paper, known as parchment, made the Library of Pergamum, the second largest in the ancient world challenged Alexandria with over 200,000 books.

The Acropolis of the city, built on terraces above a vast plain decorated by rivers from ancient times, offers visitors a unique view from the steepest theatre in the world. Located at the foot of the Acropolis – the upper city and initially dedicated to the Egyptian deities, the Red Hall later functioned as a church and mosque. Representing the traces of several beliefs and religions, Pergamum is one of the Seven Churches of Revelation that St. John wrote about in the bible. Modern Bergama town sheds light on the multicultural layers of the settlement with the Red Hall one of whose towers are still used as a mosque and the ruins of an ancient synagogue nearby.

Bergama generously presents the hidden treasures of the Aegean with its carpets, local delicacies such as çığırtma – aubergines in tomato and garlic sauce, the waterfalls, and the Kozak plateau that surrounds the settlement and offers you a green journey among the pine trees. Beautiful small bays with the finest sandy beaches and Kalem Island where shades of blue and green await you for short breaks on your cultural and natural journey through the TurkAegean.

Fertile soil with peach orchards, olive groves, and poplars as far as the eye can see and a sprawling archaeological site – the UNESCO World Heritage Ancient City of Ephesus in İzmir. Ephesus was an important port city settled continuously since the Neolithic period and became the Roman capital of Asia Minor.

Playing a vital role in the spread of Christianity, Ephesus was once home to two great Councils of the early Church and is one of the Seven Churches of Revelation. Visited by St. Paul on his missionary journeys and the final resting place of the Virgin Mary accompanied by St. John the Evangelist, Ephesus offers you a sophisticated journey in the footsteps of Early Christianity

Ephesus still bears the glamour of antiquity with its magnificent theatre where concerts and events are still held, the Celsus Library, well-preserved Roman houses, and the remains of the Temple of Artemis, one of the seven wonders of the ancient world. 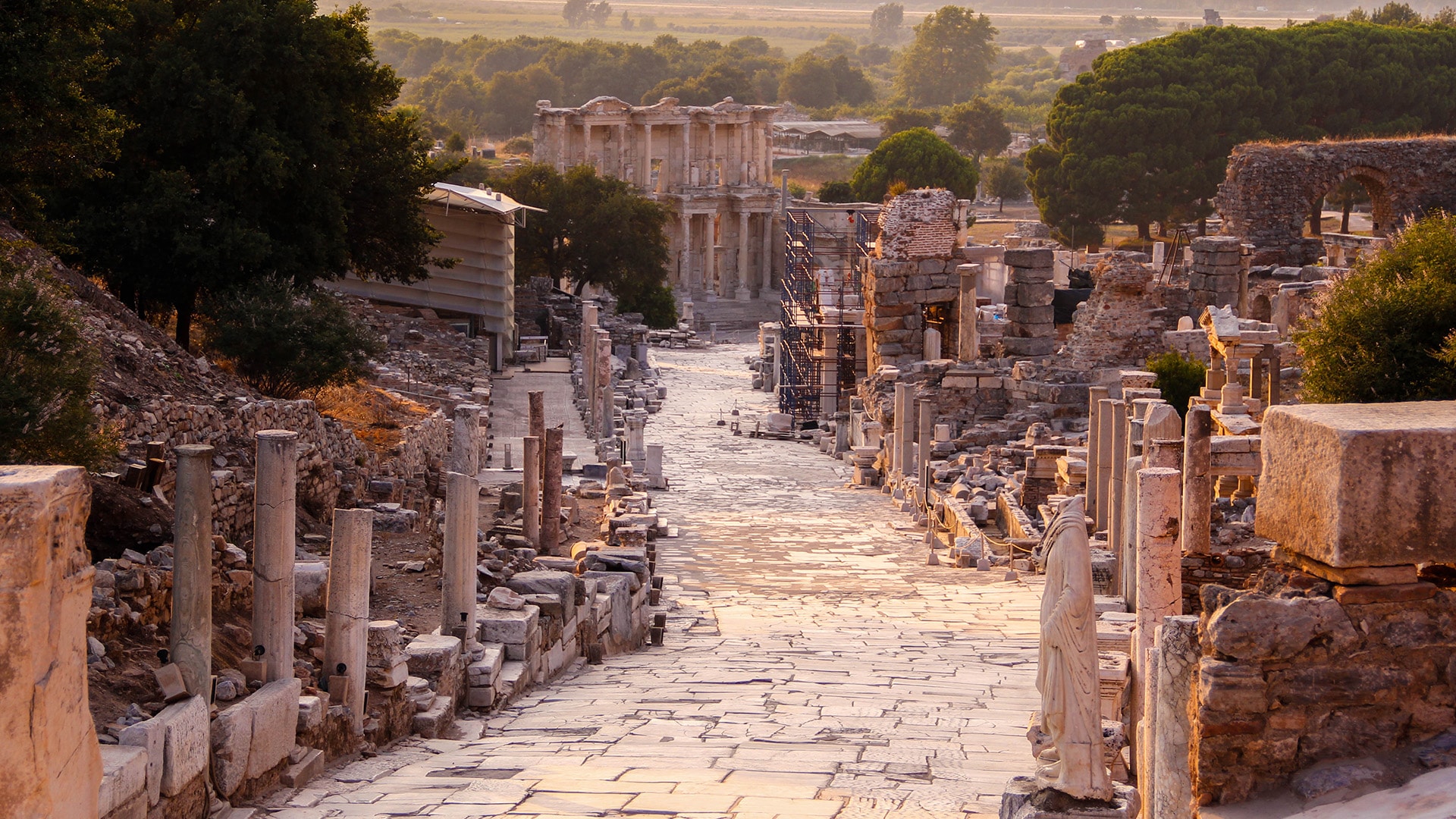 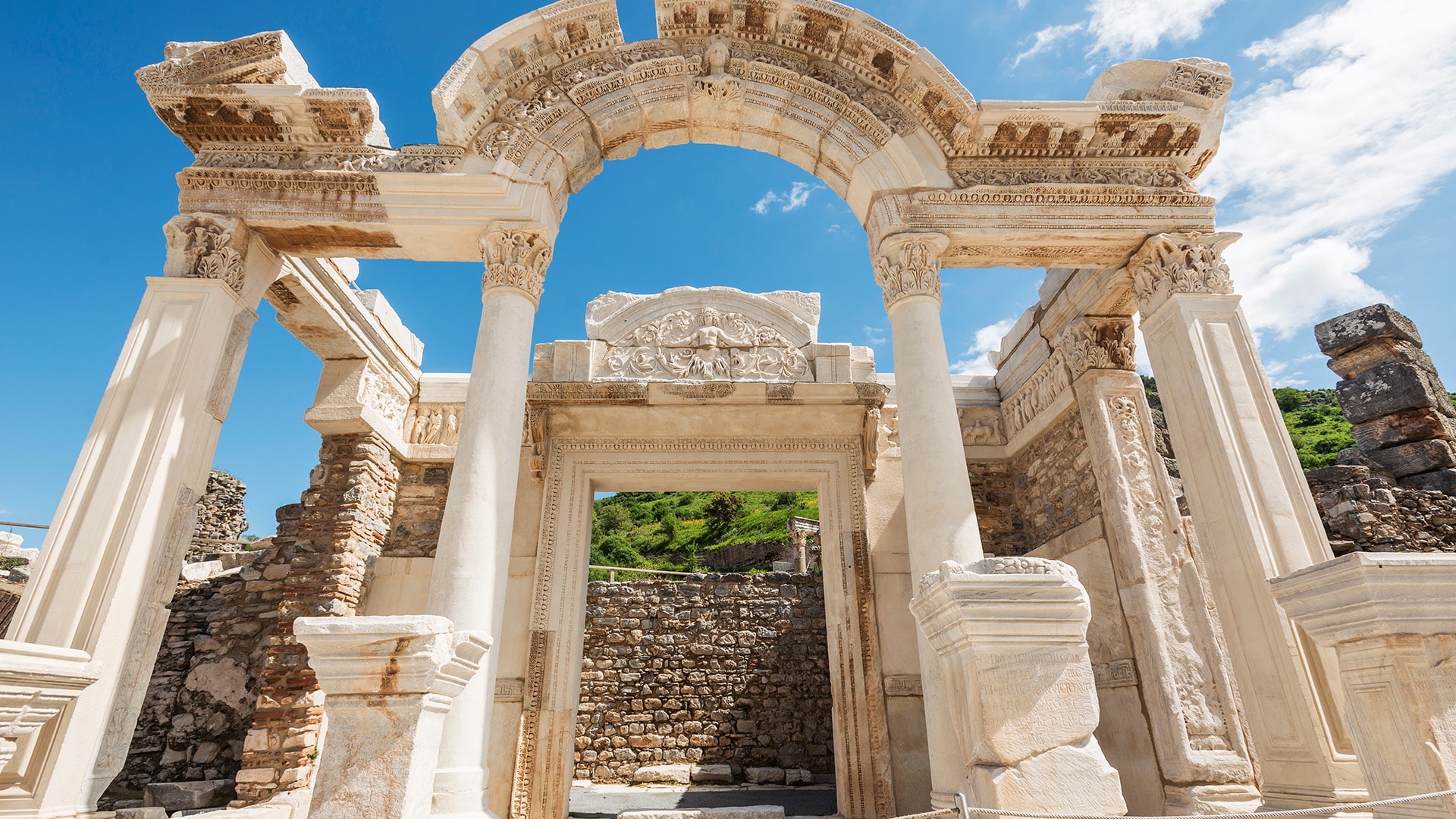 The floor mosaics of the Roman houses reveal the art and aesthetics of the period. The marbles shining under the Aegean sun and the cats of Ephesus waiting for the visitors in the shade of olive and fig trees will take you on a journey in the footsteps of ancient life.

10 kilometres away from Ephesus, the small village of Şirince offers picturesque accommodation options in traditional houses and mansions, with the bonus of panoramic views over vineyards and olive orchards. Don’t forget to try out the fruit wines and sherbets made of local flowers.

“I came all the way from distant Lycia, from the eddying Xanthos river,” says Sarpedon, the Lycian hero in the Iliad. Indeed, Xanthos was the capital city of Lycia in the early Lycian times. The city’s residents committed mass suicide at least two times in the city’s history instead of surrendering to the enemy.

The first time was in 546 BC, during the Persian invasion, and the second time was in the 1st century BC when Brutus came to Lycia to gather forces. Ruins from the city’s days of glory can be found throughout the city. In a typical Lycian tradition, the city centre is decorated with beautiful Lycian tombs.

The Xanthos River (Eşen Çayı in Turkish) flows next to the city and the view from the acropolis is outstanding. Visitors first arrive at the city gate and on the way to the agora, they come across the foundations of the Nereid Monument. At the agora, Lycian funerary monuments can be found that are unique in all of antiquity.

Directly north of the Acropolis stands a beautiful theatre that dominates the Roman agora. During Eastern Roman and Hellenistic times, a church was built at the northeast corner while an advanced defensive structure protected the western side of the citadel along the river. 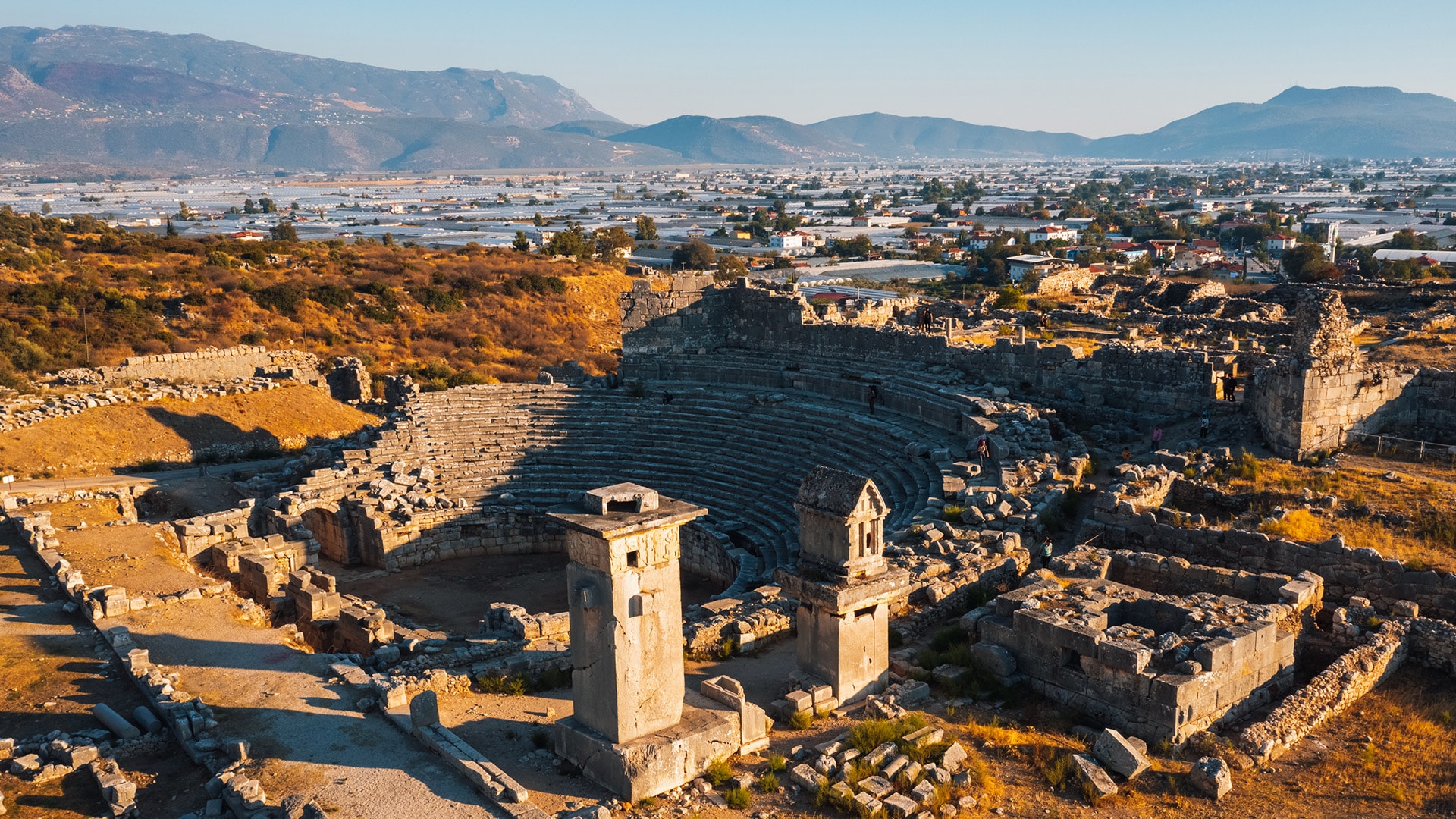 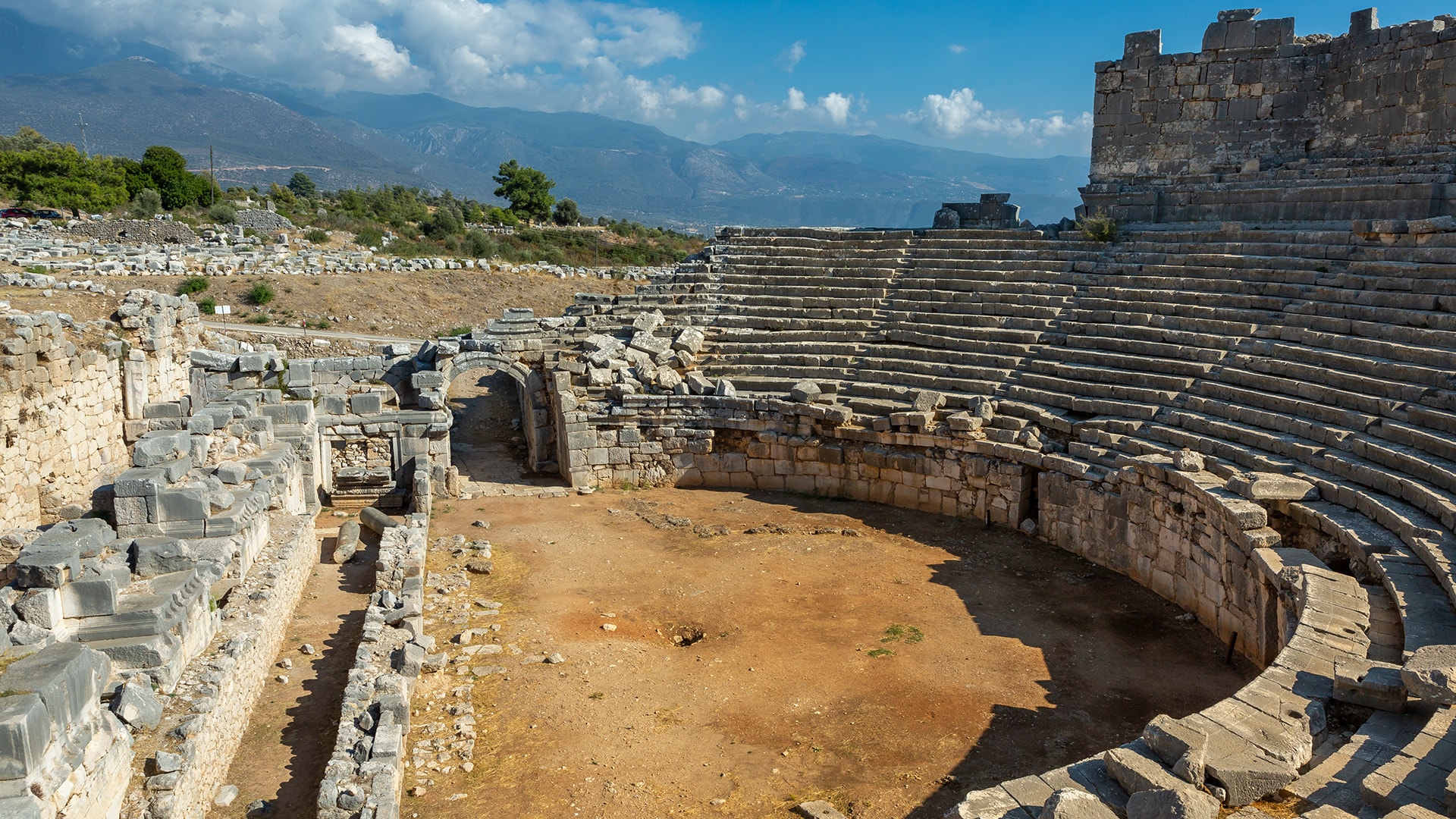 The archaeological excavations date the sanctuary as early as the 7th century BC. During the Hellenistic period, three temples were built here: a temple dedicated to Leto in the middle, and temples dedicated to Artemis and Apollo on either side of Leto’s temple. As we are told by Ovid, the Latin poet, Zeus, fell in love with the nymph Leto. When Leto became pregnant by Zeus, his jealous wife Hera chased Leto from the island of Delos. Leto came all the way to Lycia and gave birth to twins, Artemis and Apollo. This version of mythology establishes Lycia as the gods Artemis and Apollo’s birthplace. The three temples were excavated by French archaeologists. The site also includes the ruins of a nymphaeum dating back to Roman Emperor Hadrian.

Another UNESCO World Heritage - Aphrodisias, the city of Aphrodite, is located in a valley watered by a tributary of the Meander River in the city of Aydın. It is a must-see in inland Aegean.

Once the capital of the Roman Province of Caria in Asia Minor, Aphrodisias was an important art and sculpture centre with their school of sculpture which acquired widespread fame in antiquity. The Aphrodisians were fortunate in an astonishing abundance of high-quality marble in the Aegean, where they created a spectacular marble city and sculpture and statuary to decorate it. The reliefs of Sebasteion, a grandiose temple complex dedicated to Julio-Claudian emperors and Aphrodite, are a true testament to how meticulously the mythological, imperial, and ornamental reliefs in the museum were sculpted. In addition to the fascinating sculptures, the Temple of Aphrodite, the Stadium, the Odeion and the Portico of Tiberius are the must-see archaeological treasures in Aphrodisias Ancient City.

Heading towards inland valleys, two magnificent sites on the UNESCO World Heritage List salute visitors. Within the borders of Denizli city, Pamukkale, which literally means “the cotton castle”, offers a unique experience in the inland Aegean. 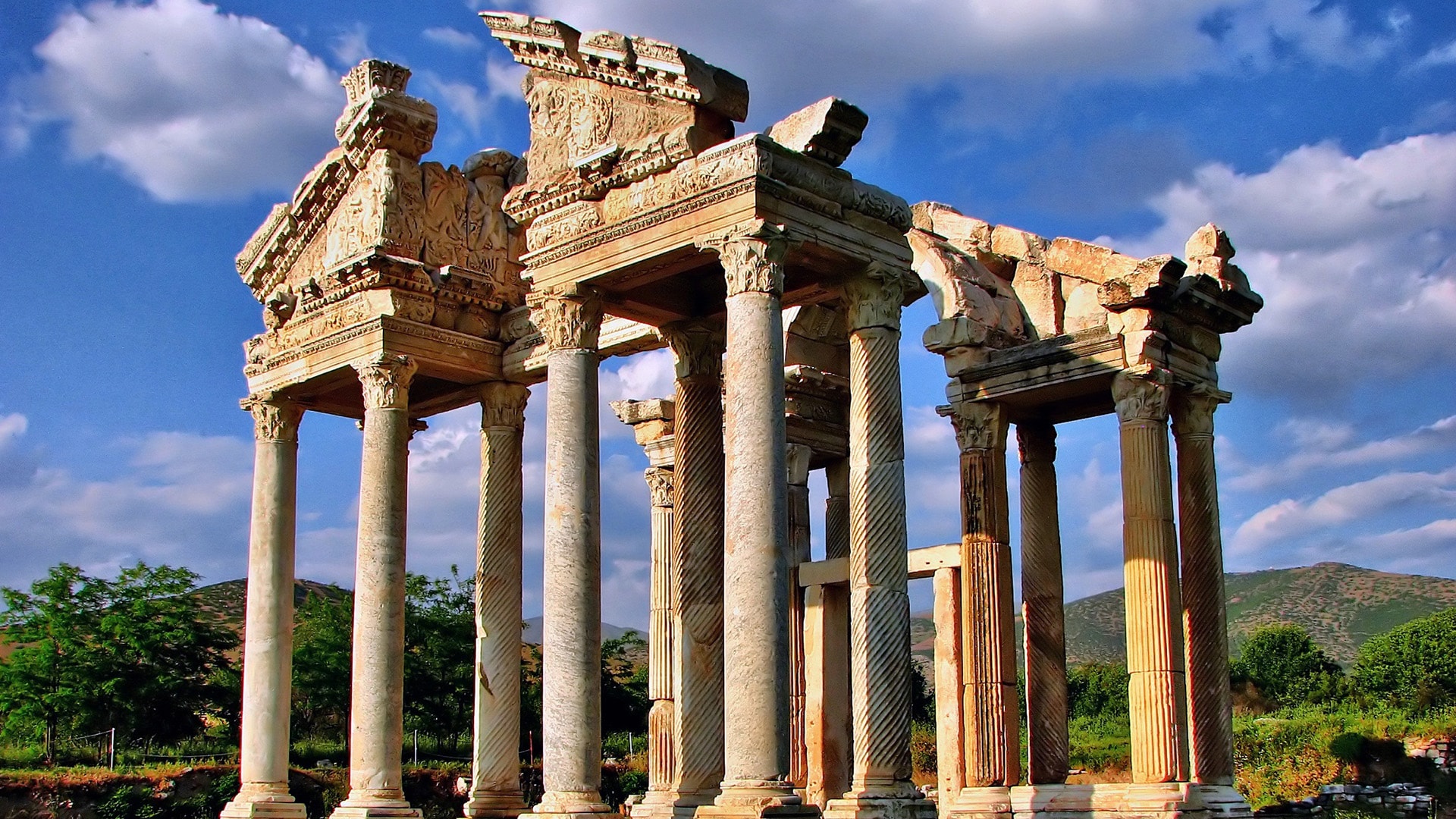 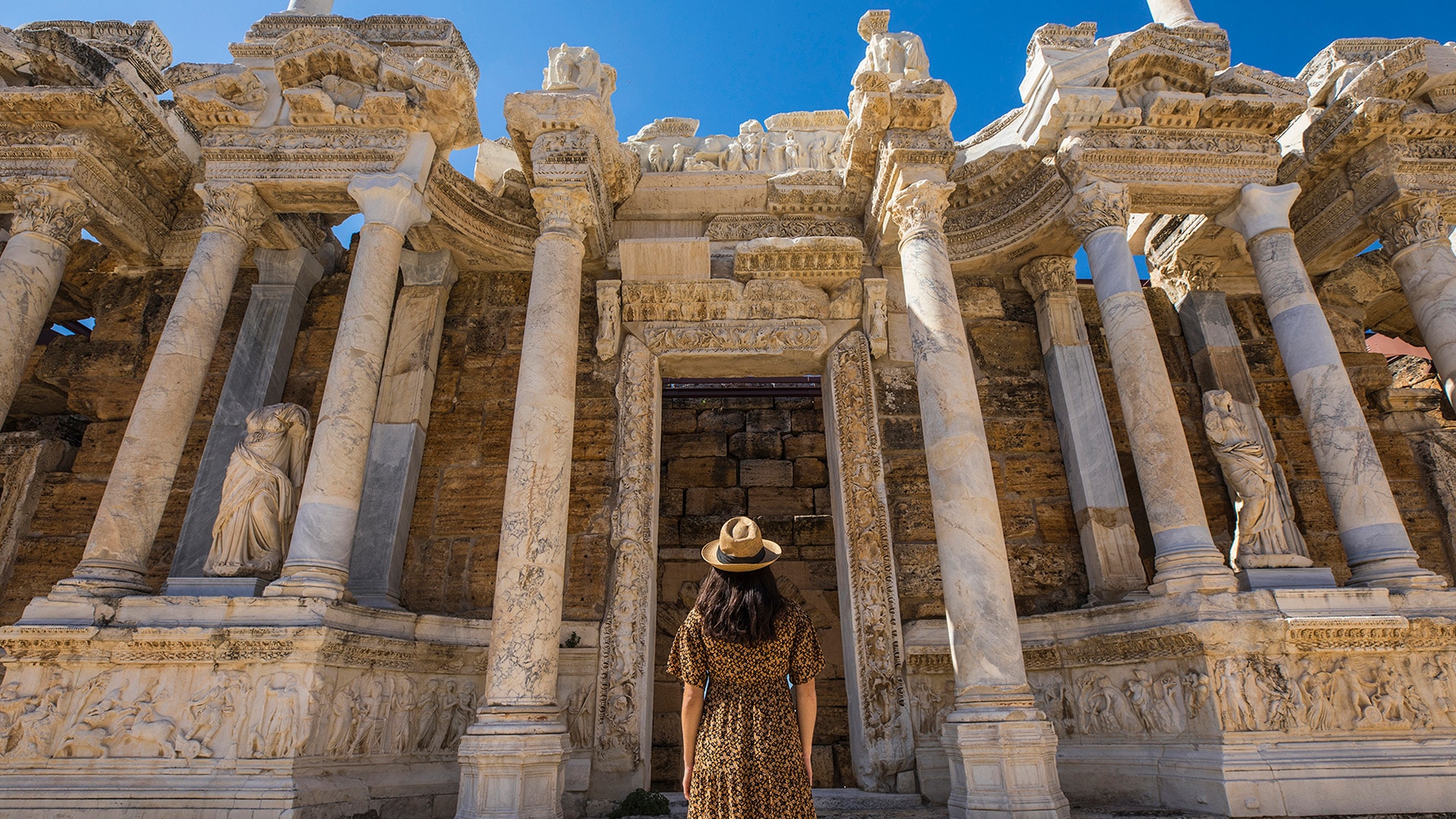 The cotton-white travertines of Pamukkale are almost surreal, as hot pools form on each shelf cascading down to the ground like a fluffy waterfall from the ancient Phrygian city of Hierapolis. The extensive ruins of Hierapolis, listed as cultural and natural heritage by UNESCO, include an impressive theatre, bath complex, a gymnasium, an agora, and an Eastern Roman church. Constituting outstanding examples of architectural remains that shed light on early Christianity, such as the cathedral, baptistery, and churches, Hierapolis is home to the extraordinary octagonal Martyrium of St Philip the Apostle.

The tradition of weaving and textile industry has been a millennia-old tradition, mainly due to the high-quality cotton grown in the Aegean Region; Denizli has been the textile capital of the region for over 4000 years. The world-famous Buldan fabric –named after the Buldan town of Denizli– is produced using a special weaving process and retains its texture for a long time thanks to its natural raw materials and colours. Buldan fabric can be used for curtains, bathrobes, bedspreads, bed sheets, linings as well as garments such as blouses, dresses, and skirts.